Those of us who live on this planet have come to believe that we are in a battle between good and evil.  We know we should want good but we are captivated by evil.  Evil seems naughty and enticing.  There is an allure.  Skulls and death are a banner of the hopelessness that many of us feel.  We wear it and somehow it makes it seem better.  We even make fun of people who seem to be good.  We call them “goodies” and brown-nosers.  So what is the God-story in this premise?

Let’s look at it this way.

Eve took a big bite of the fruit of the Tree of Knowledge of Good and Evil and it was very good.  She immediately 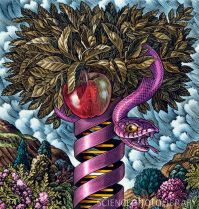 offered it to her husband, Adam.  He knew he shouldn’t eat it.  He knew what God had told him.  He could eat of any tree in the Garden, but this tree was off-limits.  He looked in the eyes of his beautiful bride and saw her pleading look and he crumbled.  He reached out and took a big bite.  He knew at once it was a mistake!  The biggest mistake of his life!

It hadn’t been many days since he had been formed in the earth and God had breathed Spirit-life into him. It had been an awesome time.  God meeting them and spending time with them.  Awesome!  But now something was very wrong.  The Spirit-life was dead and unresponsive.  He had known so many things by the Spirit and now – well, now, NOW!  He could only look around and see things that he had looked at many times and they were not as beautiful.  They were lacking.  The Light had gone out.  He looked at Eve and for the first time, he realized that she was uncovered and it gave him odd stirrings. Inside he ached to touch her.  He had never felt this way before and it frightened him!  He grabbed her hand and ran behind a nearby tree and began to make coverings out of leaves.  It was an amateur effort but it would have to do.  If he couldn’t see her beautiful body, he hoped the ache would subside.  This wasn’t the romance that Father God had explained to him when he brought her into him.

God came and told them the consequences of their choice.  The man would labor;  he would fight weeds and struggle to raise food.  The woman would have pain in child-birth.  The serpent would travel on his belly and eat dirt for the rest of his life and the woman would hate him.

There was good news – a promise that God would send His Son to save them out of this great loss and the serpent would bruise His heel, but He would crush the his head.  With those proclamations, Adam and Eve were put outside the Garden and the way back in to it was guarded by angels so they could not return and eat of the Tree of Life and in their fallen condition live forever.

Adam looked back knowing that they had really messed up!  The Garden was closed and the Spirit-life was

gone.  He was trying to figure it all out in his head and it gave him a headache.  Thus Adam and Eve began an eternal battle with good pitted against evil.  Good on the moral high ground and evil at the more  alluring level, enticing them to do their own thing;  then the battle really began.  Their sons began to argue.  In the climax of their lives outside the Garden, their son Cain killed their son Able in a jealous rage.  Death got a foothold in our lives.

Adam and Eve grieved and regretted not having trusted Father God.  They longed for the Son to come save them and they looked forward to that day.

Today we are still courting death and allowing the enemy to defeat us.  We think about murder and suicide caught in this death pull.  We delight to do our own thing and at times, this means death is attractive.

Now to be clear – God didn’t do this to us.  We did it to ourselves.  It is in our DNA.  We are under the same proclamations that Adam and Eve were under when the Garden was closed to them.  But God . . .God’s plan. . . He sent Jesus, his own Son to earth.  He lived just as we do but he did it without turning away from Father God.  Ultimately, He traded His life for ours.  Jesus allowed mankind to nail Him to a  the cross of Calvary which we sometimes call a tree.  He died for you and me and now Jesus lives for you and me.  He came out of the grave and rose up so we can live.  What love!  What an event!  It had to have shaken their world.

The media of the day were the rulers from Rome and the religious leaders.  They began the propaganda machine saying His body had

been stolen.  They told the soldiers who were guarding His body to say that they were asleep.  It was a cover-up!  If they had fallen asleep, they would have been executed by the Roman guard.

Yet, He walked among them and appeared to many people.  He is alive!  He is Life.  He brought us Spirit-Life then and He is still bringing it to those who want it now!  He brings all the Life that we can handle and more.  He is to us the Tree of Life, so now, we can eat freely and live forever with Him but, we just have to make our own choice.  We can continue to live – caught in the web of deceit and death – or we can choose Life.  It is simple to choose!  Call on the name of the Lord Jesus – and you will be saved back to Spirit-life!

Once again able to live in true reality, relationship and romance with Father and each other.  This is Father’s plan before the world was even conceived and it was because of His love.  He made us so He could love us and He wants us to return that love.

It is easy to do.  The Bible says that those who call on the name of the Lord Jesus Christ shall be saved.  Read John 3:16, 17.  Find out how much He loves you and that He is just waiting for you to call out to Him.  Each of us come to the realization of who He is in a different way.  For me, I was driving down the road, listening to the radio preacher when God took over his voice and I knew for sure that Father God was real.  I just began to say, “I’m sorry Jesus.  I just didn’t know.  I didn’t know.”  So it isn’t a formula, it is a heart thing.  Ask Him to make Himself real and I promise that He will.